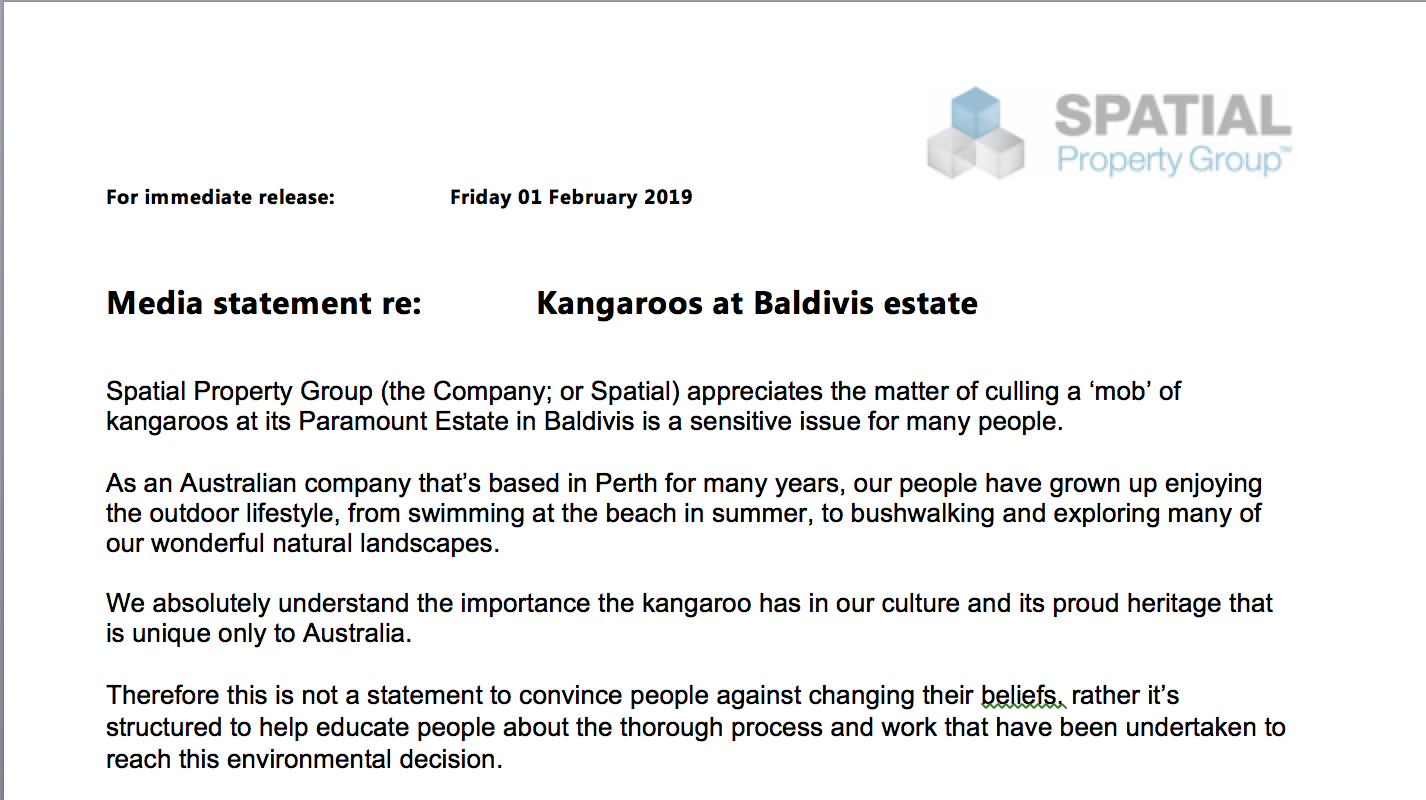 Spatial Property Group (the Company; or Spatial) appreciates the matter of culling a ‘mob’ of kangaroos at its Paramount Estate in Baldivisis a sensitive issue for many people.

As an Australian company that’s based in Perth for many years, our people have grown up enjoying the outdoor lifestyle, from swimming at the beach in summer, to bushwalking and exploring many of our wonderful natural landscapes.

We absolutely understand the importance the kangaroo has in our culture and its proud heritage that is unique only to Australia.

Therefore this is not a statement to convince people against changing their beliefs, rather it’s structured to help educate people about the thorough process and work that have been undertaken to reach this environmental decision.

Timeline of key facts and milestones

-The land was historically a family farm that has reared a variety of animals from pigs, to chickens, cattle and even ostriches – it has always been privately owned

-As part of the development process, a Fauna Management Plan (FMP) was required to ensure the integrity of the fauna would be reasonably maintained during construction

-In early 2017, the original FMP was successfully completed and lodged with the relevant authorities, then Department of Environment and the City of Rockingham (CoR) to commenced stage-1 development

-However, during the stage-1 development we were advised by the CoR that they were no longer happy with the approach outlined in the FMP and they would not allow this to occur for any further stages of the development

-The fence has ensured the kangaroos have remained on the site

-Almost 12 months later in early 2018, we agreed to produce an updated version of the FMP and therefore commissioned the expertise of kangaroo management, Perth-based Doctor Graham Thompson of Terrestrial Ecosystems

-Doctor Thompson is considered the preeminent and best Kangaroo management person in the State, he analysed the situation and produced a new recommendation on managing the kangaroos effectively in the updated FMP

-The recommendation was conducted in direct consultation with the approving authority the Department of Biodiversity, Conservation and Attraction(DBCA)

-Collectively, all parties agreed the most effective method would be to cull the kangaroos, as the ‘push them on’ or ‘dart and relocate’ scenarios both had several problems with conflicting territories, critical resource availability and low survival rates of the relocated animals

-To date the cull is yet to be carried out as the advice recommends the animals are put under duress in the hotter months of summer.

We understand the CoR and local community groups are seeking to have the animals relocated, however this defies independent and expert advice, in particular the detailed and rigorous process that has been adhered to and sanctioned by the government departments.

The advice received is that kangaroos that are darted, sedated and relocated, are likely to die a slow death due to starvation or to be easily predated upon by foxes, wild dogs, other kangaroo mobs, or to be killed on roads and tracks.